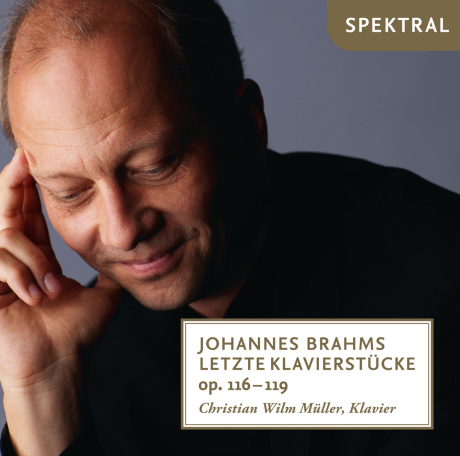 The late piano pieces of Brahms are, for the most part, intimately wrought miniatures, fascinating works that disregard both the performer and the listener. Christian Wilm Müller meets the unique stylistic challenges of these mature works with great sensitivity and radiance. The result is most convincing.

Pianist Christian Wilm Müller studied with Vokmar Lehmann in Weimar and Oleg Misenberg in Vienna and Stuttgart. Other important teachers have been Detlef Kraus in Germany, Menahem Pressler in the United States and Ferenc Rados in Hungary. Müller has won many prizes and scholarships as a soloist and chamber musician, including Usti nad Labem, the Deutsche Musikwettbewerb, the Allianz-Preis of the Festspiele Mecklenburg-Vorpommern, Studienstiftung des deutschen Volkes, and a period of study at the Cité Internationale des Arts in Paris. Concert tours as soloist and chamber musician – often as the pianist of the Liszt-Trio Weimar – have taken him throughout Europe, to Australia, Iran, Japan and South Korea. He has performed with the Deutsches Sinfonie Orchester in Berlin, the Dresden Philharmonic, the Badische Staatskapelle in Karlsruhe, the Schleswig-Holstein Symphony Orchestra, and the orchestras of Gotha/Suhl, Meiningen and Thessaloniki (Greece). He has also appeared at the Mecklenburg-Vorpommern Music Festival, the Rheingau Festival, the Oleg Kagan Music Festival, the Beethoven Festival in Sutri (I), and the Kunstfest in Weimar. He has given concerts with members of the Berlin Komische Oper, the NHK Symphony Orchestra in Tokyo and the Vienna Philharmonic. Müller has participated in live radio and television broadcasts for NDR, MDR, Bartók Radio in Budapest, DW, 3sat, and NHK in Japan. He has also been involved in various compact disc recordings. The second CD by the Liszt-Trio Weimar included piano trios by Mauricio Kagel and Alfred Schnittke. The disc appeared in 2006 and was awarded the Coup de Coeur of the Académie Charles Cros. Müller is an instructor of piano and chamber music at the Franz Liszt Hochschule für Musik in Weimar, where, in 2007, he was appointed professor. Since 2008, he has been artistic director of the Centre for Gifted Students at the Hochschule. Christian Wilm Müller has also given masterclasses in piano and chamber music elsewhere in Europe, the United States, Japan, and South Korea.