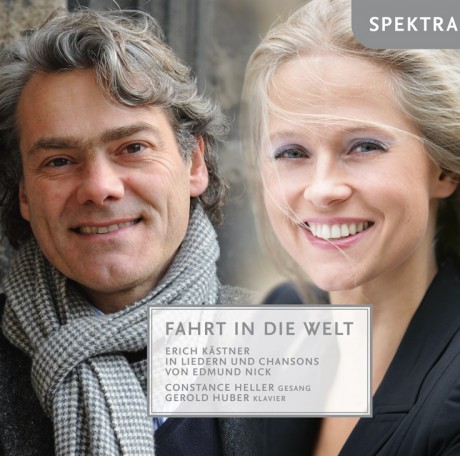 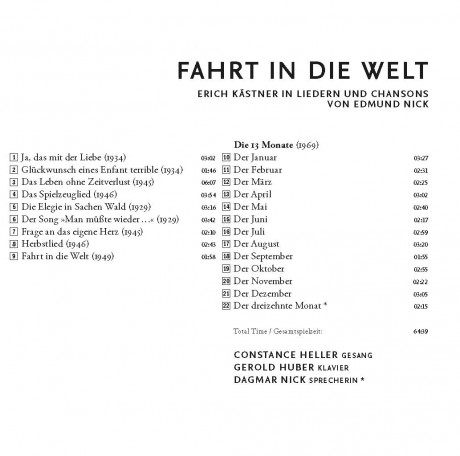 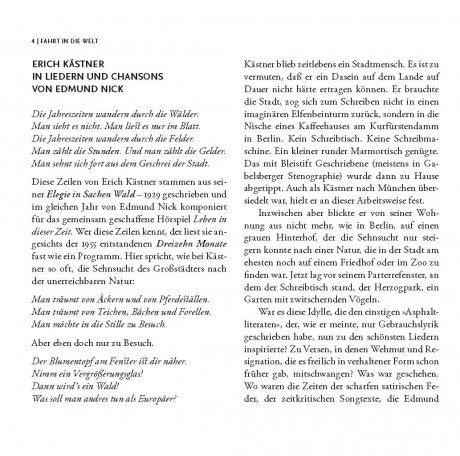 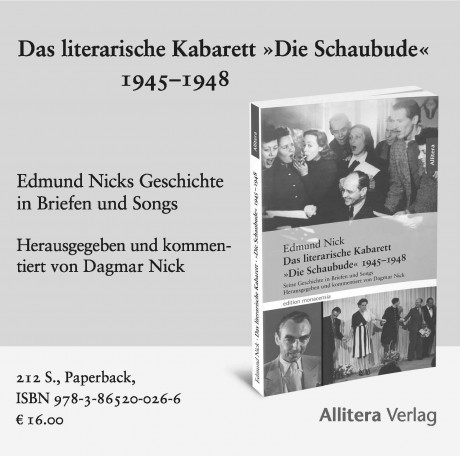 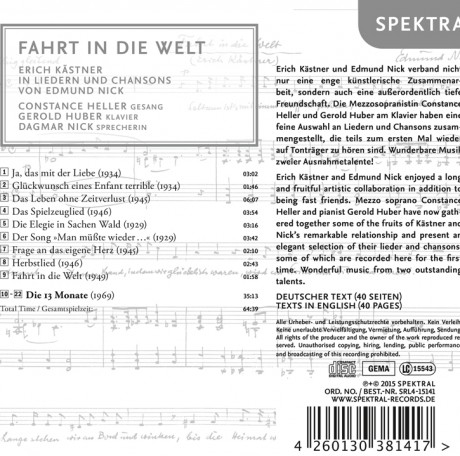 Erich Kästner and Edmund Nick enjoyed a long and fruitful artistic collaboration in addition to being fast friends. Mezzo soprano Constance Heller and pianist Gerold Huber have now gathered together some of the fruits of Kästner and Nick’s remarkable relationship and present an elegant selection of their lieder and chansons, some of which are recorded here for the first time. Wonderful music from two outstanding talents.

Mezzo soprano Constance Heller was born and raised in the picturesque city of Laufen, located in Upper Bavaria’s Berchtesgadener Land. She began appearing on stage while still in her school years with first performances of lead roles in mystery plays by Cesar Bresgen. This experience kindled her interest in singing as a career, and after finishing secondary school she went on to study at the Mozarteum in Salzburg, earning a Master of Arts degree with distinction. While still a student, she also made her operatic debut at the Giessen Theatre in Offenbach’s Tales of Hofmann, in the twin mezzo soprano roles of the Muse and Nicklausse. Regular opera and concert appearances followed in cities such as Augsburg, Krefeld/Mönchengladbach, Munich, and Hamburg.

In 2006, Constance Heller made her debut at the Berlin State Opera with the role of Anna Kennedy in Maria Stuarda and since then has appeared in Die Zauberflöte, Faust, Elektra, Der Spieler, and Parsifal (with Placido Domingo in the title role) with the company. She also sang in Moses und Aron in Tokyo during the Berlin State Opera’s tour of Japan. In addition to the Berlin State Opera, Heller has also been working regularly with the Semperoper in Dresden, and has been heard in their productions of Faust, Elektra, and Wagner’s Ring cycle. Other recent appearances include performances at La Scala in Milan, the Ruhrtriennale, Esplanade Concert Hall in Singapore, Festpielhaus in Baden-Baden, Philharmonie in Gasteig, Philharmonies of Berlin and Cologne, Berlin Konzerthaus, Bern Theatre, Rome Opera, Deutsche Oper in Berlin, Erfurt Theatre, and ­­— as ensemble member — at the State Theatre in Schwerin. Heller has worked with conductors such as Jonas Alber, Alain Altinoglu, Daniel Barenboim, Michael Boder, Johannes Debus, Asher Fisch, Daniel Huppert, Alexander Joel, Dorian Keilhack, Juri Lebedev, Kent Nagano, Julien Salemkour, Peter Schneider, Alexander Soddy, Stefan Soltesz, Christian Thielemann, and Sebastian Weigle. Stage directors include Willy Decker, Peter Dehler, Dieter Dorn, Bernd Eichinger, August Everding, Dieter Kaegi, Nikolaus Lehnhoff, Peter Mussbach, Georg Rootering, Dmitri Tcherniakov, Keith Warner, and Karsten Wiegand.

Along with all the standard trouser roles for mezzo and a large number of roles from the Wagner operas, Heller has sang Olga, Paulina, Fenena, Ulrica, Amneris, Mignon, and Dalila. She has also performed a substantial portion of the oratorio and concert literature. Among her recordings are live video productions of Der Spieler (Unitel/Barenboim), Moses und Aron (EuroArts/Boder), and Elektra (opus arte/Thielemann). She also makes an appearance in Thielemann’s DG compact disc release of Elektra.

Gerold Huber studied piano on scholarship at the Munich University of Music, where he worked with Friedemann Berger. He also attended Dietrich Fischer-Dieskau’s lieder course in Berlin. Together with baritone Christian Gerhaher (who had been a regular lieder partner since their student days), Gerold Huber was the 1998 recipient of the Prix International Pro Musicis in Paris/New York. In 2001, Huber also drew attention as a prize winner at the International Johann Sebastian Bach Competition in Saarbrücken.

He has received many glowing reviews for his collaborative work as a song accompanist. In the words of one critic, “Gerold Huber, much in demand as a song accompanist, is a brilliant pianist and plays with great depth, expression, and an outstanding technique.” He regularly appears as a lieder accompanist at festivals such as the Schubertiade in Schwarzenberg, Salzburg Festival, Opera Festival in Munich, Schwetzingen Festival, and the Rheingau Music Festival. He also performs in the most important concert halls including the Cologne Philharmonie, Frankurt’s Alte Oper, Vienna’s Konzerthaus and Musikverein, the Concertgebouw in Amsterdam, Wigmore Hall in London, New York’s Lincoln Center, Armory, and Carnegie Hall, the Salzburg Festspielhaus, and the concert halls in Essen, Dortmund and Baden-Baden.

Gerold Huber is much sought after as an accompanist and works with many singers of international repute, including Christiane Karg, Christina Landshamer, Ruth Ziesak, Mojca Erdmann, Michael Nagy, Maximilian Schmitt, Martin Mitterrutzner, and Franz-Josef Selig. As a chamber musician, Huber has performed with the Artemis Quartet and also works regularly with the Henschel Quartet, Reinhold Friedrich, and Matthias Hornung. In late 2016, Huber will undertake a tour of Japan and the United States with Christian Gerhaher.

As a piano soloist, Huber dedicates himself primarily to the works of Bach, Beethoven, Brahms and Schubert. In this capacity, he has performed in the Munich Residenz, France’s Théâtre municipal de Romains, the Kultursommer in Kassel, and the New Zealand Festival in Wellington.

Along with two CDs of solo piano music by Beethoven and Schumann, Gerold Huber has made many outstanding and award-winning recordings with Christian Gerhaher as a duo partner, and the excellent rapport apparent in their partnership is consistently noted. Also in Huber’s discography are recordings of Schubert with Bernarda Fink (for harmonia mundi in France), with Ruth Ziesak (Liszt on Berlin Classics, Haydn and Mahler/Zemlinsky on Capriccio, and Mendelssohn on AVI), with Maximilian Schmitt on Oehms Classics (Clara and Robert Schumann, and Schubert’s Die schöne Müllerin), and with Franz-Josef Selig (lieder by Schubert, Strauss, and Wolf on AVI).

Gerold Huber is also in demand as an instructor and has given masterclasses at Yale University, the Alderburgh Festival, and the Schwetzingen Festival. Since 2013, he has held a position as professor of lied accompanying at the University of Music in Würzburg.

Dagmar Nick was born in Breslau in 1926 and was raised in Berlin. She studied graphology and psychology in Munich and went on to become one of the most important German female poets of the post-1945 period. Since 1947 she has published radio dramas, short stories, travel books, and three monologues. There are also eleven volumes of poetry, the most recent being Eingefangene Schatten, mein jüdisches Familienbuch (C. H. Beck Verlag München, 2015). She is a member of PEN and the Academy of Fine Arts and has been the recipient of several prizes in literature such as the Liliencron Prize of the City of Hamburg (1948), the Eichendorf Prize (1966), the Roswitha Medal (1977), the Andreas Gryphius Prize (1993), and the Horst Bienek Prize (2009).