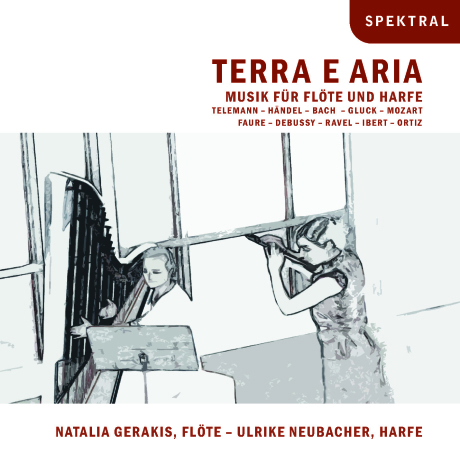 Music for flute and harp

Unlike other instruments, the flute and the harp combined emanate a sense of harmony and peace. Particularly in a period of French music, which began at roughly the same time as the Impressionist art movement, peace achieves a scenic touch recalling its roots in an ancient shepherd idyll. Allowing the audience to trace these rich facets is one of the special attractions of this CD. The acoustics of the monastery church of Springiersbach (near Bengel, Rhineland-Palatinate, Germany), where this CD was recorded, excellently support this purpose.

A real gem of a CD, and one that clearly stands out from the usual…the interpretations are at once refined and euphonious, demonstrating sound knowledge and musical understanding… an ideal choice!
from VIMA, Athens, 2009

In this masterly recording by Terra e Aria, all of the performances radiate youthful energy and have a natural vitality, while showing deep respect for the score.
From JAZZ & TZAZ, Athens, 2009

Natalia Gerakis is considered to be one of the most accomplished young flutists in Greece today. She is based in both Stuttgart and Thessaloniki and has performed as a soloist, chamber musician and orchestral player at major halls and festivals throughout Germany and Greece. In addition, concerts and tours have brought her to numerous countries in Europe, Asia, Africa and South America. Natalia Gerakis has held the position of principal flute in the Thessaloniki State Symphony Orchestra. Subsequent engagements have included performances with the State Orchestra of Athens, the Popular Orchestra Mikis Theodorakis, the Wuerttembergisches Kammerorchester Heilbronn and the Chamber Theatre of the State Opera House of Stuttgart. Her work involving contemporary chamber music has been broadcast by Bayerischer Rundfunk and Greek Broadcast and Television. Natalia Gerakis studied with Geneviève Amar and Vicens Prats at the Nadia & Lili Boulanger Conservatoire in Paris, from where she graduated with the “1er Prix de la Ville de Paris”. She obtained her post-graduate diploma from the State University of Music and Performing Arts Stuttgart, in Germany, under Prof. Jean-Claude Gérard, on scholarship of the Greek State. She has also gained a scholarship of the Alexander S.Onassis Foundation. Other important tutors to her have been Dimitris Fotopoulos, Robert Dohn and Andreas Noack.
Currently, she is a sought-after tutor of international music courses (European Academy of Camerata Europaea /GR, Deutscher Tonkünstlerverband Instrumentenkurse /Germany, Springiersbacher Meisterkurse /Germany, Adams European Flute Center /Holland, International Forum for Flute and Piano /Luxembourg, Internationaler Arbeitskreis für Musik /Germany,  Semaine de la Francophonie Lusaka /Zambia). She particularly enjoys working for concentrated short periods of time with young flutists, helping them towards achieving their own goals.
She is teaching Flute Methodology at the State University of Music & Performing Arts Stuttgart/Germany.

Austrian harpist Ulrike Neubacher, daughter of the professor and harp maker Johann Neubacher, began her musical studies at a very young age on a harp specially made for her by her father. She studied with Professor Emminger in Salzburg and in the class of Professor Reichling at the State Music Academy of Stuttgart, from where she graduated with her soloist’s diploma. In parallel to her studies she was a regular fi rst prizewinner in many national and international competitions. From the age of 15 Ulrike Neubacher has gathered a lot of experience as a soloist. Her large number of concerts, recordings and television appearances in both Europe and Asia are testament to her exceptional musicality and continual artistic activity.
Ulrike Neubacher has a particular passion for chamber music. Aside from the standard duet pairings she also appears in duets with voice, trombone and double bass.
She is regularly playing with major orchestras and ensembles such as SWR Radiosinfonieorchester Stuttgart, dem Radiosinfonieorchester Saarbrücken, the Südwestrundfunkorchester Freiburg, the Baden-Badener Symphoniker, the Stuttgarter Philharmoniker, the Orchestre Symphonique de Lyon, the Philharmonie Merck, the Symphonieorchester Vorarlberg ot the Ensemble Plus. She lives and performs mainly in Southern Germany and Austria. In addition her artistic reputation makes her a pedagogue who is in demand throughout Germany, Austria and Switzerland.