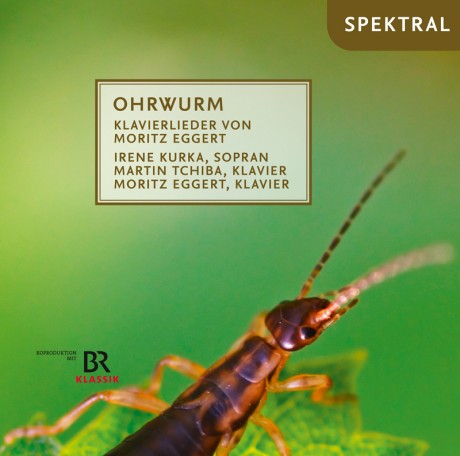 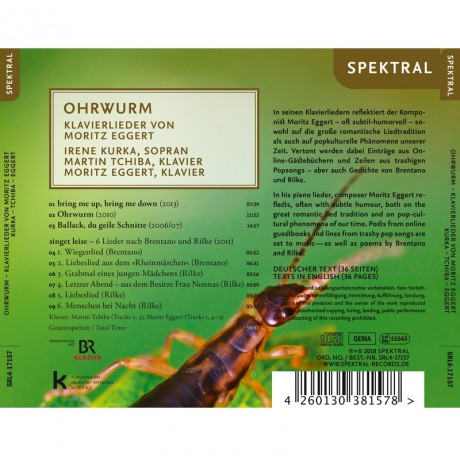 In his piano lieder, composer Moritz Eggert reflects, often with subtle humour, both on the great romantic lied tradition and on pop-cultural phenomena of our time. Posts from online guestbooks and lines from trashy pop songs are set to music — as well as poems by ­Brentano and Rilke.

Irene Kurka
Irene Kurka
Irene Kurka studied voice at the Musikhochschule Munich with Reri Grist, at the Meadows School of the Arts (SMU) in Dallas with Barbara Hill Moore and at the University of British Columbia in Vancouver with Nancy Hermiston.
The multifaceted soprano received many awards and scholarships. She sings recitals, opera and oratorio throughout Germany, Europe and the United States. Within the realm of contemporary music, she is in great demand; many composers (Eggert, Corbett, Weeks, ­Muntendorf, Frey, Kampe, Seither, Brass, Beuger, ­Pisaro, etc.) wrote and dedicated new creative output for her to perform as well as record. She has premiered over 210 pieces.
Since 2009, Irene Kurka has focused intensively on the repertory for unaccompanied voice (Hildegard von Bingen, Nono, Berio, Cage, Bauckholt, Brass, Beuger, Stäbler, etc.). In 2012 she released a CD with music by Hildegard von ­Bingen and John Cage, as a co-production with ­Bayerischer Rundfunk and Wandelweiser Records. This was followed by another CD co-production with Bayerischer Rundfunk and Wandelweiser Records, considering the topic of prayer and containing music by Brass, Beuger, Boon, Weeks, Corbett and Houben. After the acclaimed debut of her solo programme Prayer at the Huddersfield Contemporary Music Festival in the UK, Irene Kurka has been invited to perform at hcmf//@l’auditori in Barcelona. Graham McKenzie, the director for both festivals in Huddersfield and Barcelona, was so impressed by the programme that he decided to bring it to the Catalonian metropolis in October 2014.
Irene Kurka sings with the ensembles E-MEX, notabu, Musikfabrik, Wandelweiser, modern art ensemble, ­Pegnitzschäfer-Klangkonzepte, Schlagquartett Köln, chronophonie, Kölner Vokalsolisten, La Tenerezza, socell 21 and Soprakkordeon.
She has performed, among others, at the following venues and festivals: Tonhalle Düsseldorf, Kölner Philharmonie, Konzerthaus Berlin, Gare du Nord Basel, Huddersfield Contemporary Music Festival, L’Auditori Barcelona, ­Theater Dortmund, Festival Mecklenburg-­Vorpommern, ­Hungarian Radio ­Budapest, Poznan Musical Spring, ­Moments Musicaux Aarau, Hydra ­Festival ­Boston, Acht Brücken Festival Köln, ­Festival ­Muziek Biennale ­Niederrhein, ­Theater ­Osnabrück, aDevantgarde ­Festival München, ­Opening! Festival Trier, Kunst-Station Sankt Peter Köln, ­Ensemblia Mönchengladbach, Randspiele ­Berlin-Zepernick, ­Greifswalder Bachwoche, ­Oberstdorfer ­Musiksommer, Fränkischer Sommer, ­Neuburger ­Kammeroper, ­Bayreuther Barock.
www.irenekurka.de

Moritz Eggert
Composer, pianist, conductor, performer and writer Moritz Eggert was born in Heidelberg in 1965 and is considered one of the most versatile and adventurous voices of contemporary music. Growing up in Heidelberg, Mannheim and Frankfurt am Main, he played keyboard in various rock and jazz ensembles at school, which he followed with academic studies as a classical pianist and composer. These studies continued in London and Munich, where he resides today with his wife, the writer ­Andrea Heuser, and his two children Milo and Siri.
From the beginning, Moritz Eggert has been working across all musical genres as a composer. He uses different styles of music and continuously tries to work for a new approach to and interaction with contemporary music. Through often widely discussed projects such as Freax, an opera created together with Christoph Schlingensief in 2007, or Wir akzeptieren die Nutzungsbedingungen, a commissioned work on the occasion of the centenary of the Goethe University Frankfurt 2014, Eggert tries to challenge the common image of contemporary music being a matter for experts only.
Moritz Eggert’s list of works already encompasses more than 240 works, with not only twelve evening-long operas (e. g. Die Schnecke 2007, All diese Tage 2012, Teufels Küche 2014, Traviata remixed 2016), but also several ballets, works for dance and musical theatre and orchestral music. ­Moritz ­Eggert also writes chamber and ensemble music (e. g. the lied cycle Neue Dichter Lieben and the piano solo cycle Hämmer­klavier) and composes vocal and choral music (with a strong focus on “lied”), church music, experimental and electronic music, instrumental concertos, music for children and young people, music for film and radio, as well as radio plays and open air spectacles.
Additionally, Moritz Eggert is a renowned and experienced pianist and has played countless premieres of his own and other works in Germany and abroad. Over the past few years, he has also been appearing increasingly as a conductor, actor and singer, performing in operas and theatre.
Moritz Eggert is also actively working within cultural policy and is a vocal opponent of cuts in arts funding. This also makes him a passionate defender of the younger generation of composers. Together with Sandeep Bhagwati, he founded — whilst still a student — the aDevantgarde ­Festival for young composers in Munich, a festival that is still going strong today. Eggert has been a board member of the “German Composer’s Association” for three years and tutors as a professor of composition at the University of Music and Theatre in Munich (since 2010).
Alongside his many articles for national and international print and online media, he also writes regularly (often scathingly ironically and thought-provokingly) for his own “Bad Blog of Musick”, which is considered the most influential blog for contemporary music in Germany.
www.moritzeggert.de

Martin Tchiba
Pianist Martin Tchiba was born in 1982 in Budapest and has been living in Germany since 1985. His concert appearances include performances at the following venues and festivals: Concertgebouw Amsterdam, Tokyo Opera City Recital Hall, Budapest Autumn Festival, Spoleto Festival, Braunschweig Classix Festival, Europäisches Klassik-Festival Ruhr, Unicum Festival in Ljubljana (as soloist with the Slovenian National Philharmonic), Festival Enescu in Romania, Budapest Music Weeks, Tonhalle Düsseldorf, Beethovenhaus Bonn, Flagey Brussels, in Berlin, Basel, Den Haag and Salzburg. He was also invited to give a solo performance in Berlin in the presence of the heads of state of Germany and ­Austria. In 2017, his social media piano project WIReless at Tonhalle Düsseldorf attracted attention.
His CDs, released on the Naxos, Telos, Hungaroton and Challenge Classics labels, received many positive reviews in international music magazines. He has made numerous live and studio recordings and broadcasts for radio and television, as with WDR Cologne, SWR, SR, Bayerischer Rundfunk, Deutschlandradio Kultur, the Hungarian and the Dutch broadcasting services. The Dutch Television made recordings at the “Bimhuis” at Muziek­gebouw Amsterdam. Berlin’s RBB Kultur­radio broadcast a one-hour-long portrait of the pianist, SR 2 KulturRadio aired a two-and-a-half-hour-long portrait.
In his repertoire containing works of all ages, the music of the 20th and 21st centuries plays an important role. He performs it also in combination with works from earlier times. This opens a new perspective — the familiar alongside the new. Tchiba has given the first performances of many new compositions (works by Gerhard Stäbler, Michael Denhoff, Moritz Eggert, Johannes Kreidler, Kunsu Shim, György Kurtág, László Sáry and others).
Following several years of piano ­studies with Karl-Heinz Kämmerling in ­Hannover and outstanding successes in competitions for young musicians, Martin Tchiba ­studied at the Musikhochschule in Saarbrücken with Thomas Duis and at the Musikakademie in Basel with Jean-Jacques Dünki.
Tchiba was given various scholarships and awards, including scholarships from the Friedrich Ebert Foundation and from the German Academic Exchange Service DAAD, the Cultural Award (Kulturförderpreis) of the Federal State Capital Saarbrücken as well as promotions from the Kunststiftung NRW. Martin Tchiba was the artistic leader of a project launched by “Bipolar — German-Hungarian Culture Projects” and the German National Cultural Foundation on the subject of inno­vative music instruction (2006/07).
Additionally, he studied composition with Michael Denhoff in Bonn. Tchiba’s works have been performed at the International Gaudeamus Music Week in Amsterdam and at the aDevantgarde Festival in Munich, among others.
www.martin-tchiba.com