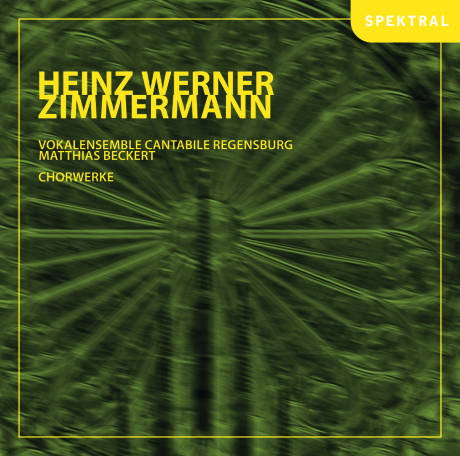 Zimmermann’s choral compositions and arrangements of sacred music have been established as part of the modern vocal repertory. Jazz elements and the innovative combination of choir and double-bass are distinctive of his oeuvre. The Vokalensemble Cantabile, led by Matthias Beckert, presents a selection of his works, including in particular three spirituals which have been premiered by the ensemble. H.W. Zimmermann dedicated one of them to the ensemble‘s director.

Born in Freiburg (Breisgau) on August 11, 1930, H.W. Zimmermann studied composition under Julius Weismann (1879–1950) and Wolfgang Fortner (1907–1987) as well as musicology under Thrasyboulos Georgiades at the University of Heidelberg. In 1954 he became Fortner’s successor as lecturer for composition and music theory at the Institute for Protestant Church Music in Heidelberg. This is also the place where, beginning in 1956, his first motets for choir and plucked double bass showing a strong infl uence of Jazz and the African American Spiritual came into being.
In 1963 he became appointed the director of the School for Church Music in Spandau. From there his reputation as an educator also spread throughout the USA Several American publishing houses competed for translations of his German works as well as compositions originally written in English. In 1967 he was awarded with an honorary doctoral degree from Wittenberg University in Springfield (OH/USA), later he received the Wittenberg Award from the Washington (D.C.) based Luther Institute. In Germany, Zimmermann garnered several prizes for his compositions. He was decorated with the Villa Massimo Stipend (Rome, 1965–66). In 1975 he received a call from the Conservatory of Frankfurt am Main to fill a professorship for composition and music theory. Currently he is retired, living in Oberursel im Taunus near Frankfurt am Main. In 2009 the university of Leipzig awarded him the laureate of Dr. theol. h.c.
Today Heinz Werner Zimmermann’s works are performed all over the world. With his motets accompanied with plucked double bass, his psalms for organ, as well as his hymns in prose he has developed new compositional styles. Undoubtedly, his a-cappella choral works (with and without accompanying double bass) constitute his most popular compositions, of which this CD gives a representative retrospective. By now his five oratorial works have become equally popular: the 150th Psalm, the Missa Profana (premiered fi fteen times on three diff erent continents since its appearance), the Bible of Spirituals, the Symphonia Sacra in five movements, which premiered in the Leipzig Gewandhaus in 1997, and the Te Deum, making its debut at the Berlin Philharmonie in 2000.
Komposition und Kontemplation (2000) and Komposition und Reflexion (2005) may be considered Heinz Werner Zimmermann’s most important theoretical monographs.

The Vokalensemble Cantabile Regensburg seeks to perform music from five centuries of a cappella repertoire according to the stylistic conventions specific to each musical era.
During its short history Cantabile Regensburg has garnered wide critical acclaim. In May 1998 the ensemble was presented with an award after it had won the 5th Bavarian choir competition in 1997. They also competed successfully at the internationally renowned 7th chamber choir competition in Marktoberdorf (Germany) in 2001; this must surely mark a high point of this young group‘s career. Cantabile Regensburg‘s consistently high level of performance was again confirmed at the equally renowned choir competition in Tolosa (Spain) in the fall of 2003. Two years later the ensemble was awarded anew with the highest rating outstanding at the Bavarian choir competition and received a mention for the best interpretation of a choral work from the Romantic period.
Cantabile Regensburg was founded by Christian Preißler in 1992 and has been headed by Matthias Beckert since 2002. Since then the dedication to contemporary choral music has had a strong bearing on the choir’s repertoire. With its third CD the Vokalensemble Cantabile Regensburg now presents choral works by composer Heinz Werner Zimmermann.
Further informations: cantabile-regensburg.de/wirueberuns/chor_en.php

Matthias Beckert (born in 1976) studied music education and graduated with diplomas in sacred music with Gerhard Weinberger, orchestral conducting with Yuuko Amanuma and choral conducting with Jörg Straube’s master class. His eclectic repertoire includes all signifi cant oratorial works from the Renaissance to the 20th century. Since 1998 he has worked as musical director and conductor of the Monteverdi Choir Würzburg and since 2001 he has been a member of the faculty at the Würzburg conservatory where he is holding a position as instructor for choral conducting.
In 2002 he took up the musical directorship of the Vokalensemble Cantabile Regensburg. During his work with the ensemble he has focused on contemporary a-cappella music and conducted numerous premiers of recently written compositions. In doing so, Matthias Beckert has formed a close collaboration with composer Heinz Werner Zimmermann.
At the Würzburg Mozart Festival in 2006 Beckert arranged the concert celebrating its 85th anniversary featuring compositions of the festival’s founder, Hermann Zilcher. His continuously high level of performance and his long record of outstanding achievements were honored by the Würzburg city administration with the award of the medal for cultural commitment.
The Bavarian Radio Choir decorated Matthias Beckert at the forum for choral conducting in 2007. In the same year he received a call to fi ll the position of the choirmaster of the Suhl Singing Academy and the Suhl Boys Choir. 2008 he conducted at the International Bachwoche Stuttgart.
From 1999 to 2005 he served as the conductor of the Pizzicato orchestra. Currently, he successfully collaborates with distinguished ensembles such as the Jenaer Philharmonie, the Thüringen Philharmonie, the Bach-Collegium Stuttgart, the Mainphilharmonie, and the Concert Royal Cologne. His ongoing musical activities are documented by numerous radio and television productions as well as digital recordings.