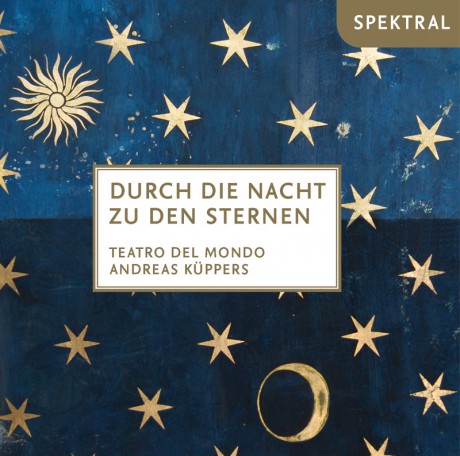 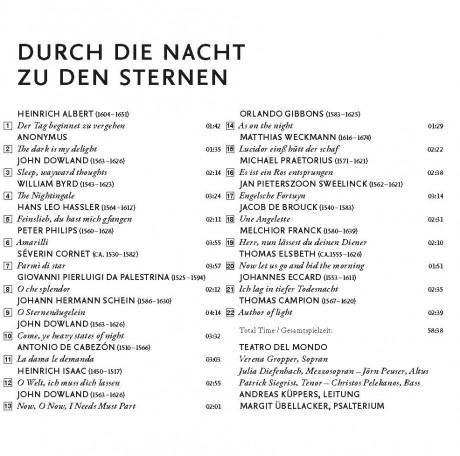 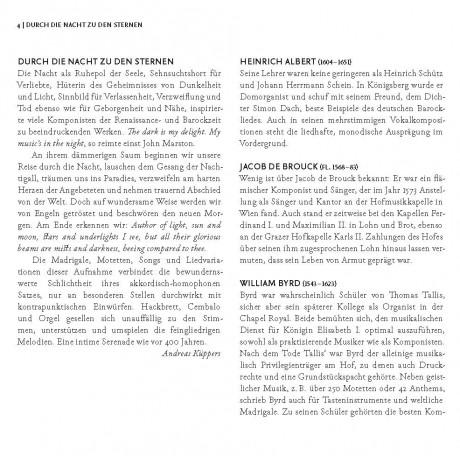 Join us on a journey through the night with all its longings and mysteries, as madrigals, motets, and songs help us make our way through darkened landscapes. A nocturnal serenade under the stars with the vocal ensemble teatro del mondo.

The great theatre of the world

The world is a stage, and on it one can find beggars and kings, the young and the old, villans and nobles, and everything in between. It is the most colourful of arrays devised by God, the Master of the Universe. The metaphor of the world as a stage is central to how humans in the Renaissance and Baroque Eras saw themselves, inasmuch as they constantly longed for a better world even while experiencing the pleasures of daily existence. The vocal group Teatro del mondo has given itself the task of reviving the music of those eras, allowing its expressive power and emotional depth to live once again.
The musicians in teatro del mondo first met and forged their musical identity in 2007 during the International Orfeo Project held at the Music University in Frankfurt am Main under the direction of Gabriel Garrido, one of the leading Monteverdi specialists of our time. Many critically acclaimed concerts followed, both at home and abroad.
Recent highlights include appearances and live broadcasts with the Rheingau Music Festival, the Mecklenburg-Vorpommern Music Festival, The Vielklang Festival in Tübingen, the RheinVokal Festival in the Middle Rhine region, the Beethovenfest in Bonn, and the Young Euro Classic-Festival in Berlin. The group has also attracted much attention for their performances of a reconstruction of Bach’s Köthener Trauermusik for large performing forces at the Frankfurt Cathedral Concerts under Michael Schneider. The latter undertaking was realized in cooperation with Frankfurt’s La Stagione and the Frankfurt Concerts in the Kaisersaal in addition to the Irsee Festival. Another aspect of the ensemble’s work is their participation in performances of madrigal comedies set by Jürgen Tamchina and Stefan Bastian and accompanied by large continuo groups.