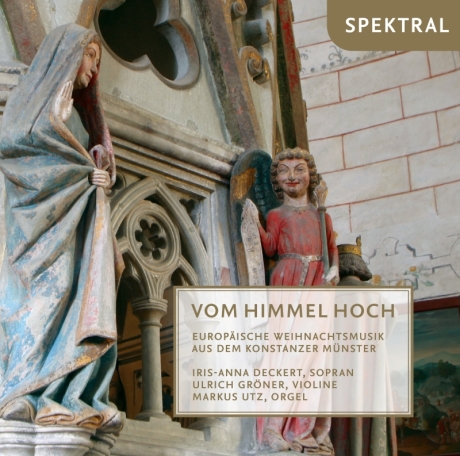 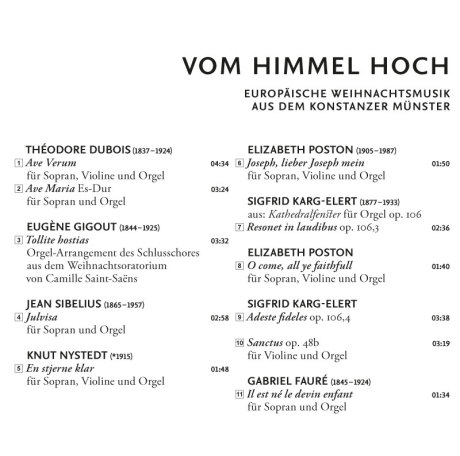 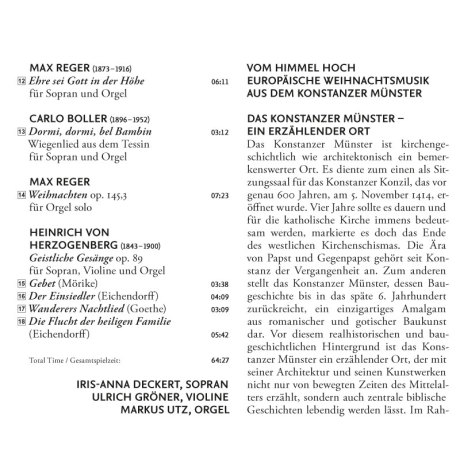 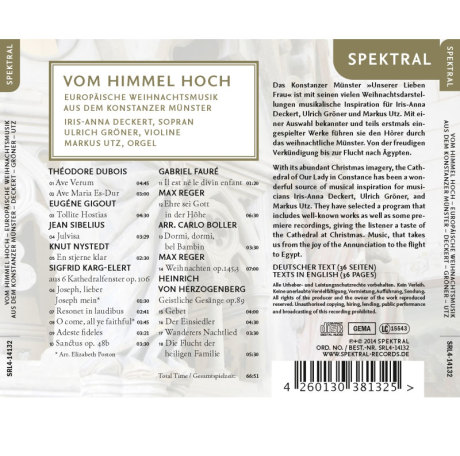 With its abundant Christmas imagery, the Cathedral of Our Lady in Constance has been a wonderful source of musical inspiration for musicians Iris-Anna Deckert, Ulrich Gröner, and Markus Utz. They have selected a program that includes well-known works as well as some premiere recordings, giving the listener a taste of the Cathedral at Christmas. Music, that takes us from the joy of the Annunciation to the flight to Egypt.

Iris-Anna Deckert was born in Straubing. While still young, she received her first voice lessons under Julia Bauer and Ingrid Kessler at the Academy of Church Music in Regensburg. She continued her studies at the Leopold Mozart Conservatory in Augsburg under Dorothea Chryst and graduated there with a degree in Vocal Performance. Further studies followed with Prof. Edith Urbanzcyk at the Hochschule der Künste in Berlin. Private lessons with Jessica Cash in London as well as participation in various masterclasses completed her musical training. In 1993, Iris-Anna Deckert received a scholarship from the Association of German Theatres. She began working professionally while still a student, singing in various choirs such as the Radio Chamber Choir of Berlin, the Bavarian Radio Choir, and the Stuttgart Chamber Choir. She has been a free-lance performer since 1996 and is in demand internationally for early music as well as new music. She regularly performs at important European festivals and has many CDs and radio recordings to her credit.

Ulrich Gröner
Ulrich Gröner was born in Ulm. He studied in Munich, Cologne (with Moscow’s Semyon Snitkovsky), and also worked extensively with members of the Melos Quartet and the Amadeus Quartet. As violinist of the Beethoven Trio from Ravensburg, he has won prizes in chamber music competitions in Colmar, Trapani and Florence. He has also been the recipient of awards and grants from the Deutsche Musikrat in Bonn. Gröner is act ive as a soloist and also holds the position of concertmaster in the Southwest German Radio Orchestra of Baden-Baden and Freiburg. He also serves as a juror for the Jugend musiziert national competition. He was a violinist in the Heine Quartet from 2003 to 2007 and today his chamber music work takes him throughout much of the world. As part of the Beethoven Trio, he has made many recordings of the great classical and romantic composers for LP and CD. Since 1993, he has been a professor of violin and chamber music at the University of the Arts in Zurich.

Markus Utz
Markus Utz is Professor of Conducting and Choral Conducting at the Zürich University of the Arts. From 2001 to 2008 he was closely involved in the church music scene as regional Kantor and Music Director at the Cathedral in Constance. Before this, his studies took him to Munich, Detmold and Stockholm, to Gerhard Weinberger, Anders Eby and Eric Ericson. As well as successes in competitions as an organist, as a conductor he held scholarships from the German Academic Exchange Service and the Scandinavian Bach Academy under Sir Andrew Parrot. In 2003, he was a finalist in the Eric Ericson Award. With his sensitive and subtle, distinctive interpretations and his striving for an exceptionally refined sound, he has come to be regarded as one of the top choral directors in Europe. As well as his professorial duties, he is in great demand as a jury member, course leader and guest conductor of distinguished choirs. 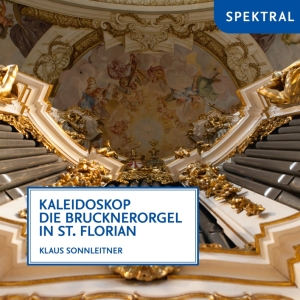