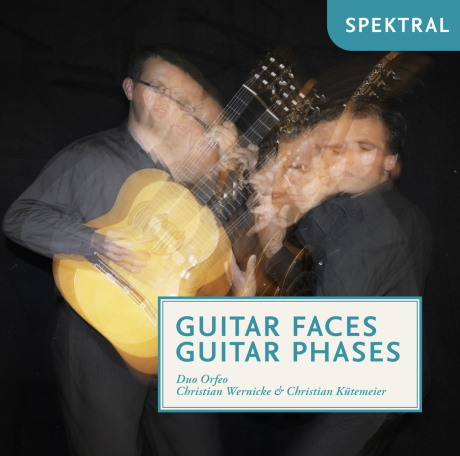 The combination of two guitars makes an ideal instrumental pairing that few other same-instrument duos can equal. Christian Wernicke and Christian Kütemeier certainly show this to be the case with their sensitive and virtuosic performances of original works and arrangements from two different centuries.

The internationally recognized guitarists Christian Wernicke and Christian ­Kütemeier founded Duo Orfeo in 2004 after having won the Deutsche ­Musikwettbewerb, which is Germany’s most important competition for young musicians. Following their win, they have given many concerts and have been enthusiastically received by public and press alike. On the invitation of the German Foreign Office, they appeared as German cultural ambassadors at the International Cultural Festival in Asilah, Morocco. Shortly thereafter, the Goethe Institute sent them to Chile for a concert tour. Their performances have swiftly established them in the top rank of German guitar duos.

Christian Wernicke was born in 1976 and studied guitar with Alvaro ­Pierri and ­Roberto Aussel, and conducting with ­Reiner Schuhenn at the Cologne ­Musikhoch­schule. He also spent a year in Madrid on a European Union scholarship. While there, his activities included founding and leading the guitar orchestra at the Real Conservatorio Superior.
As soloist, chamber musician and conductor, he appears regularly as a guest at international festivals and has participated in many TV, radio, and CD productions. With the support of the Goethe Institute and the German Foreign Office, he has undertaken tours in countries spread across all five continents: Cuba, Brazil, Chile, Peru, Costa Rica, Nicaragua, Australia, Thailand, Laos, Singapore, ­Morocco, Spain, France, Italy, Russia, Lithuania, Denmark and the Czech Republic.
He has performed with orchestras and as soloist in many venues, including the ­Berlin, Cologne and Munich ­Philharmonies, the Hamburg Musikhalle, at Munich’s ­Herkulessaal, and in the ­Konzerthaus am Gendarmenmarkt in ­Berlin. Christian Wernicke has enjoyed the support of various important scholarships and has been a prize winner at numerous national and international competitions. In 2003, he won the most important competition for young musicians in Germany, the Deutsche Musikwettbewerb. A year later, in 2004, he captured first prize at the international Open Strings Competition and was the recipient of scholarships from the Deutsche Musikrat and the Kunststiftung Baden-Württemberg.
Since 2007, Christian Wernicke has been an instructor of guitar at the ­Fach­hochschule (University of Applied Sciences) in Heidelberg and in Goethe Institute programmes abroad. In 2010, he received a grant from the Villa Musica and participated in the Mahler Chamber Orchestra’s European tour, playing at the ­Festspielhaus in Baden-Baden and the Théâtre des Champs-Elysées.
www.christian-wernicke.de

Christian Kütemeier was born in 1976 in Karlsruhe. As a sixteen-year-old, he joined the guitar class of Sonja Prunnbauer at the Musikhochschule in Freiburg. He received his performance degree (Diplom) in 2000 and subsequently studied with Jürgen Rost at the Franz Liszt Hochschule in Weimar, where he completed his graduate studies (Konzertexamen) in performance (2003). While in Freiburg he also studied lute with Fritz Mühlhölzer and historical performance practice with Robert Hill and ­Ekkehard Weber.
Along with his activities as an instructor at the Musikschule in Südschwarzwald, he gives regular concerts as soloist and with various chamber music groups. A significant part of his pedagogical and artistic work is devoted to arranging works in various styles, as well as writing original compositions of his own. In addition, he is active as a director of choirs and other ensembles.
Christian Kütemeier has been the recipient of many prizes at national and international guitar competitions, beginning with the first prize at the the national ­Jugend Musiziert competition in ­Darmstadt (1993). Following this, he went on to win second prize at the International Guitar Competition in Templin (1994) and first prize at the Anna Amalia Competition in Weimar (1995). In subsequent years, he was a prize winner and finalist in various other competitions including the ­Stotsenberg International Guitar Competition in Malibu, California, USA, the Karl Scheit International Guitar Competition in ­Vienna, and the fourteenth International Guitar Competition in Carpentras, France, for which he won the second prize and the jury’s special prize. In 2003, he won the Deutsche Musikwettbewerb in Berlin and received a grant from the Konzertreihe Junger Künstler (KJK). In 2005 he won a sponsorship prize from the VoBa-Hochrhein-Stiftung for his musical achievements.
www.christian-kuetemeier.de