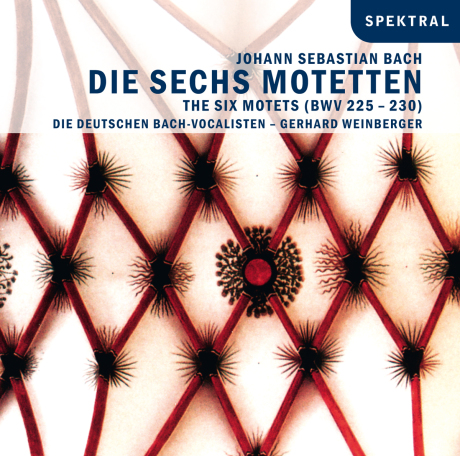 In an outstanding recording, the German Bach-Vocalists under the direction of Gerhard Weinberger underline the uniqueness of the motet in sacred works by J. S. Bach. Perfection of ensemble and a reliance on the most authentic performance practices make this recording a jewel. This is a re-release of a CD which originally appeared on the Calig label in 1995.

»This CD is mere ‘ear candy’, you’ll never get tired of listening to it. It is the most accomplished perfection.« (Musica sacra)

»Weinberger balances the Bach Vocalists with a steady hand on the fine line between soloist brilliance and choral homogeneity.« (Coburger Tageblatt)

were founded as a project choir by Gerhard Weinberger in 1986 and existed until the Bach Year 2000. Their artistic work was based on the historical practice of performance, as it is discernible from 16th and 17th century sources. Since its founding, the ensemble specialised on performances with a small ensemble according to the practices of chamber music, as it was custom in Bach’s times. Besides the a-cappella repertory, the ensemble began to devote itself to Bach’s major sacred choral works, which were put on in cooperation with renowned soloists and baroque orchestras. It took the ensemble only a short time to be noticed among experts. Numerous invitations to international festivals and concert series give testimony to the high esteem in which the ensemble was held.

studied Organ music with Franz Lehrndorfer and sacred and school music at the University of Music and Performing Arts, Munich. In 1971 he received the award of the ARD International Music Competition in the subject Organ music. He had been musical director at the Basilica of St Lawrence in Kempten, Germany, for three years, before he was made lecturer for Organ and Sacred Music at the University of Music and Performing Arts, Munich in 1974. Three years later he received the professorship for Organ music there. Since 1983 he has been professor for Organ music at the Academy of Music Detmold. He is also in charge of the Academy’s department for sacred music, and he has been director of the vocal soloist ensemble of the Academy’s baroque academy, which was founded by himself. Additionally, he is member of the European Academy of Sciences and Arts and member of the board of the Neue Bachgesellschaft, Leipzig.
He has directed numerous national and international concerts; he repeatedly put on periodic performances of Bach’s complete organ œuvre; he produced various CD-recordings (among others the complete Organ œuvre of Johann Sebastian Bach played on historical instruments of the Bach age); he has gained awards for his recordings; he has been active as a juror on musical competitions; he published a considerable number of editions of organ and sacred music (among other things the complete organ œuvres of Johann Ludwig Krebs and Robert Schumann); and he published a monograph: “Zur Interpretation der Orgelmusik J. S. Bachs” (On the interpretation of J. S. Bach’s organ music).