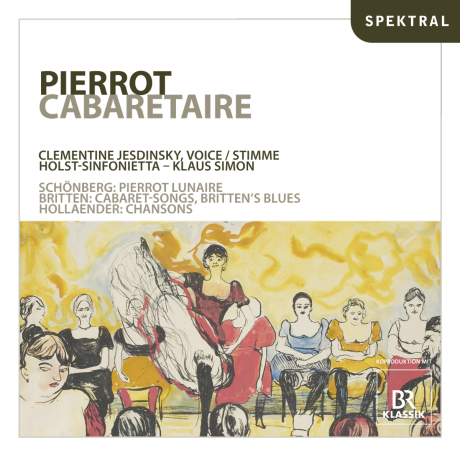 If it weren’t for Schoenberg’s influential Pierrot Lunaire, an astonishing landmark of New Music, the character of Pierrot would be just another cabaret figure. Schoenberg himself has a connection to cabaret through his Brettl songs. Benjamin Britten’s Cabaret Songs are part of this tradition, which also includes Friedrich Hollaender, one of the most important German song writers. In bringing together the musical styles of such a diverse group of composers, the listener is given the opportunity to discover hidden connections between them. A co-production with BR KLASSIK.

Clementine Jesdinsky studied voice in Düsseldorf with Ingeborg Reichelt, Celina Lindsley, and Michaela Krämer and graduated with a Konzertexamen. Guest performances at opera houses in Düsseldorf, Duisburg, Oberhausen, Halle, and in the Studio of the Semperoper in Dresden. Participation in numerous world premieres, such as in de nacht van de Singel, the 20th anniversary of the concert center in Antwerp; in the Akzente festival in Duisburg; the “Biennale for contemporary music” 2005 in Zagreb; and in tours to Italy, Poland, and Chile. Founded the Ensemble Cassander for modern music in 1999, with which she has performed Schoenberg’s Pierrot lunaire numerous times, including a performance in November 2005 in the Konzerthaus in Dortmund. Collaborations with the notabu ensemble for modern music, with the Baroque ensembles concert royal, Umbach und Consorten, and Telemannisches Collegium Michaelstein. Appearances in the Festival de musica contemporanea in Palma, in the Printemps des Artes in Monte Carlo, in the festival Europa ohne Grenzen in the Tonhalle Düsseldorf, and in the Konzerthaus Dortmund in both a portrait concert of Luigi Nono and in the Langen Orgelnacht. Soloist in CD productions for WDR and MDR with Hermann Max (Rheinische Kantorei), Norbert Schuster (Alte Musik Dresden), and Manfred Cordes (Weser Renaissance).

An advance into the unknown… A trip down untrodden paths… These are two ways to characterize the programs of the Holst-Sinfonietta, a chamber ensemble based in Freiburg, Germany. The ensemble derives its name from the English composer Gustav Holst (1874 – 1934). It was founded in 1996 by its conductor, Klaus Simon and is composed of instrumentalists from southern Germany. Right from its creation, a priority for the orchestra has been the desire to offer unusual and challenging concert programs of high quality music, irrespective of stylistic barriers. Premieres of works by prominent composers such as Adams, Schwantner, Tüür, HK Gruber, Turnage and Torke testify to the seriousness of that desire. The quality of the selected compositions and their meaningful combination in original programs are the primary considerations behind the concert planning of the Holst-Sinfonietta. The ensemble also has a close connection with the Young Opera Company (YOC), which, in its endeavor to perform masterworks of musical theater, is a perfect complement to Holst-Sinfonietta. In addition to numerous radio productions, the Holst-Sinfonietta has produced several CDs since 1999. The ensemble began recording for Naxos in 2003 and has recorded several projects, receiving outstanding reviews in leading periodicals such as Fono Forum, the BBC Music Magazine, and the FAZ. One milestone for the ensemble was the complete recording of John Adam’s song play “I Was Looking at the Ceiling and Then I Saw the Sky”. In 2008 the Holst-Sinfonietta gave its debut at the ZKM in Karlsruhe with the first performance of Thomas Hummel’s “Aus Trachila” for speaker and big ensemble. In October 2009 a concert with chamber music by Martinu was broadcast live by South West German Radio (SWR). Their latest concert with works by Steve Reich and Terry Riley in January 2010 was once again a big success. “The perfectly led ensemble penetrates deeply into the layers of the music and thereby avoids any monotony one might expect“, critics of the Badische Zeitung commented. Parts of this program have been recorded for Naxos. Future projects include works by Gustav Mahler, John Adams and Polish 20th century composers.
Further information: www.holst-sinfonietta.de

Klaus Simon studied music, German, and geography in Freiburg. He studied piano with Michael Leuschner and attended master classes with Aloys Kontarsky as well as Hans Zender and Johannes Kalitzke. Simon is the founder and music director of the Holst-Sinfonietta, the Youth Orchestra of the Holst-Sinfonietta (JOHS), and the Young Opera Company. With those ensembles, he dedicates himself primarily to the music of the 20th century, without defining himself exclusively as a modern music specialist. The core of his work as a conductor consists of moderate or classical modernism: the composers of the Second Viennese School, Stravinsky, Britten with his precursors and contemporaries, and the representatives of American modernism such as Reich, Adams, Schwantner, and Crumb. He has also worked for many years both nationally and internationally as an accompanist and vocal coach. Since 2007 he is also working as arranger for Universal Edition Vienna. His arrangements of Mahler’s 1st and 4th Symphony, as well as Schoenberg’s Lieder with orchestra op. 8, for chamber orchestra have been performed by notable ensembles in Europe and the USA such as e.g. musikfabrik, Ensemble Kontrapunkte, Nouvel Ensemble Contemporain and Atlantic Classical Orchestra. He is the founder and director of a concert series in Freiburg for 20th century vocal music. In his repertoire are rarities such as lieder by Korngold, Pfitzner, Schoenberg, Rihm, Hindemith, Bridge, Holst, Clarke, Crumb and Rorem in addition to songs by Weill, Guettel, Brown and Sondheim. As accompanist of Britta Stallmeister, he recorded the American composer Joseph Schwantner’s Two Poems after Aguedo Pizarro in 2003 for Naxos, garnering magnificent attention in the press. Currently he works as the spiritus rector of a CD recording of the complete works for voice by Hans Pfitzner and Erich Wolfgang Korngold, and has numerous other recordings for CD and radio (DRS2, SWR2, Bayern4Klassik) to his credit.