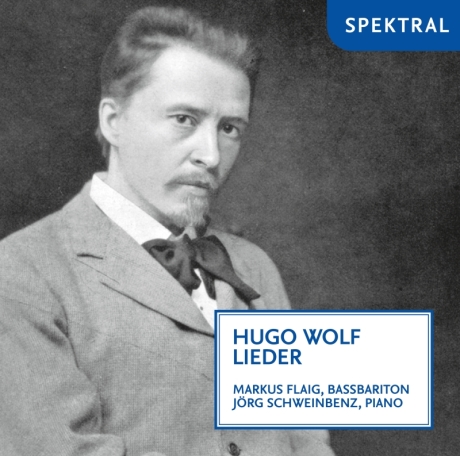 Hugo Wolf’s position among the great lieder composers is due to his deep expressive power and sensitivity to textual content — qualities which make his lieder so extraordinarily special. For this recording, Markus Flaig and Jörg Schweinbenz have chosen a dramatically varied program of these works and have been allowed exclusive use of the Hugo Wolf piano which resides in Tübingen.

Markus Flaig
Bass-baritone Markus Flaig first came to music through the organ, while the study of school and church music served as his entry point into singing. His teachers were Beata Heuer-Christen in Freiburg, Berthold Possemeyer in Frankfurt, and Carol Mayer-Bruetting. Since his success at the Leipzig Bach Competition, he has taken his place as one of the most sought-after singers of his generation. Concert tours have taken him throughout Europe and to Israel, Columbia, Mexico, and Korea. He has undertaken a tour of Japan under Masaaki Suzuki and has recently been to Brazil, Uruguay and Argentina in order to perform Bach’s B-minor Mass with the St. Thomas Choir of Leipzig.Numerous radio, television and CD recordings under conductors such as Thomas Hengelbrock, Hermann Max and Konrad Junghänel bear witness to his broad repertoire, which ranges from Renaissance music to oratorios of the Baroque, Classical and Romantic eras. Flaig has also given premiers of contemporary works, and Franz F. Kaern has composed an orchestral lieder cycle (after poems by Thomas Bernard) for him. On the operatic stage, he has appeared in works by Monteverdi, Purcell, Rameau, Strauss and Britten as well as in revivals of long-forgotten works such as Il marito indolente by the Mozart contemporary Joseph Schuster, and Sardanapalus by Christian Ludwig Boxberg. Since 1997, he has performed a large amount of lieder with pianist Jörg Schweinbenz, suppelementing his recitals with performances of melodramas and recitations.

Jörg Schweinbenz
Jörg Schweinbenz was born in Tübingen and studied music education, piano and orchestral conducting at the University of Music in Freiburg. Following his music studies, he took up teaching positions in Freiburg and Tossingen, and since 2008 has been Professor of Lied Improvisation and Performance at the University of the Arts in Berlin. Together with Philipp Moehrke and Peter von Wienhardt, Schweinbenz teaches the course “Klavier aktuell” (The Piano in Modern Life) at the Music Academy in Trossingen.Jörg Schweinbenz and bass-baritone Markus Flaig have been musical collaborators since their student days. In recent years, Schweinbenz has also been specializing in free improvisation, concentrating especially on new and experimental music. He concertizes regularly both as a soloist and in chamber ensembles, and is active in a variety of genres from classical to jazz.