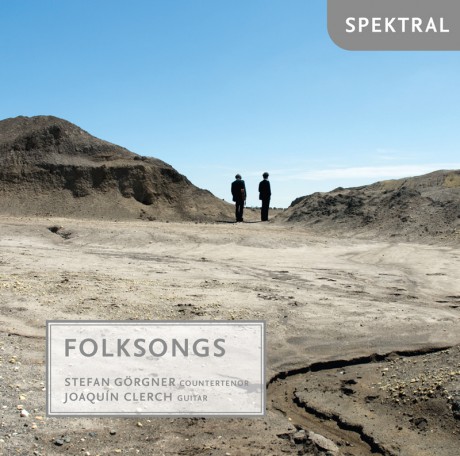 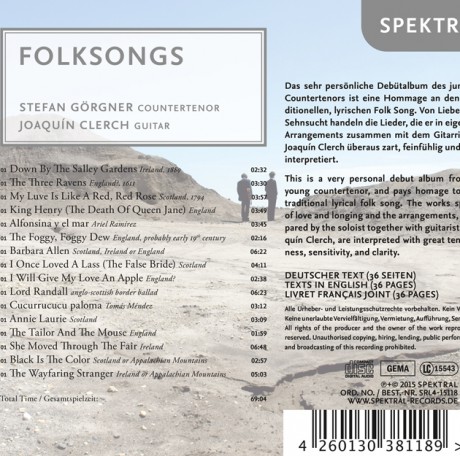 This is a very personal debut album from a young countertenor, and pays homage to the traditional lyrical folk song. The works speak of love and longing and the arrangements, prepared by the soloist together with guitarist Joaquín Clerch, are interpreted with great tenderness, sensitivity, and clarity.

01 DOWN BY THE SALLEY GARDENS
02 THE THREE RAVENS
03 MY LUVE IS LIKE A RED, RED ROSE
04 KING HENRY (THE DEATH OF QUEEN JANE)
05 ARIEL RAMÍREZ: ALFONSINA Y EL MAR
06 THE FOGGY, FOGGY DEW
07 BARBARA ALLEN
08 I ONCE LOVED A LASS (THE FALSE BRIDE)
09 I WILL GIVE MY LOVE AN APPLE
10 LORD RANDALL
11 TOMÁS MÉNDEZ: CUCURRUCUCU PALOMA
12 ANNIE LAURIE
13 THE TAILOR AND THE MOUSE
14 SHE MOVED THROUGH THE FAIR
15 BLACK IS THE COLOR
16 THE WAYFARING STRANGER

Stefan Görgner began his post-secondary music studies by concentrating on guitar performance, which he pursued under Harald Lillmeyer at the Richard Strauss Conservatory in Munich. Earlier musical interests also included rock music, jazz, and New Music. Eventually, however, he discovered that he loved Baroque music. In 2002 Tim Hennis discovered Görgner’s voice and encouraged him to develop it. These combined developments soon led, in 2003, to vocal studies with Christina Wartenberg at the Felix Mendelssohn-Bartholdy University of Music in Leipzig, where Görgner graduated with a music degree (Diplom) in 2008. In the meantime, he has also received musical guidance from Howard Crook, Julie Hassler, Barbara Schlick, and Andreas Scholl.
Stefan Görgner has worked with conductors such as Christopher Moulds, Hermann Max, Morten Schuldt-Jensen, Michael Hofstetter and Rupert Huber. In addition, Görgner has performed with numerous period groups such as the Neue Düsseldorfer Hofmusik, the Göttingen Baroque Orchestra, Elbipolis, Le Concert Lorrain, and Capriccio Basel. Concert and opera performances include appearances at the Handel Festival in Halle, the Thuringia Bach Festival, the Ekhof Festival in Gotha, the Ludwigsburg Festival, and the Styriarte Festival in Graz.
The American composer Robert Moran wrote the countertenor roles of Ludus de Antichristo and Buddah goes to Bayreuth especially for Stefan Görgner. The latter work’s world premiere took place in May of 2014 at the Salzburg Aspekte Festival with the Stuttgart Chamber Orchestra under the direction of Rupert Huber.
Stefan Görgner also appears in solo recitals, in which he accompanies himself on the guitar, sometimes with the addition of a loop station. Also a composer of vocal and chamber music, his choral work Muoa oder zur Sonne und zurück enjoyed great success at its premiere during the Centennial Celebrations of the German Museum in Munich.
www.goergner.com

The Cuban guitarist Joaquín Clerch was born on 8 August 1965 in Havana, where he was later to receive one of the Cuban government’s highest artistic award, the Orden por la cultura nacional. He studied guitar, music and composition in Havana, graduating from the Art University of Havana in 1989. In 1990, Joaquín Clerch continued his studies at the Mozarteum University in Salzburg, Austria. Here he studied guitar with Eliot Fisk and Early Music with Anthony Spiri and Nikolaus Harnoncourt, who wrote of him: Joaquín Clerch is an uncommonly gifted musician. His playing is technically outstanding and highly poetic, and his intellectual capacity for understanding the problems of early music performance is extraordinary.
He graduated with distinction in Salzburg in 1991 and was awarded the prize for extraordinary artistic achievement by the Austrian ministry of science and research.
Joaquín Clerch has won many important guitar competitions, such as the Andres Segovia competition in Granada, the Heitor Villa-Lobos competition in Rio de Janeiro, Printemps de la Guitare in Brussels and the ARD competition in Munich. He has played in many cities and prestigious concert halls the world over, e. g. Concertgebouw Amsterdam, Palacio de la Música (Barcelona), Théâtre Royal de la Monnaie (Brussels), Alte Oper Frankfurt, Auditorio Manuel de Falla (Granada), Teatro Nacional (Havana), Cemal Resit Rey (Istanbul), Kölner Philharmonie, Brucknerhaus Linz, Auditorio Nacional de Música (Madrid), Münchener Philharmonie, Radio France Paris, Beijing Concert Hall and Konzerthaus Vienna.
He has performed as a soloist with orchestras such as the Sinfonieorchester des Bayerischen Rundfunks, the Orquesta Sinfónica Nacional de España, the Orquesta Nacional de Cuba, the Filarmónica de Bogotá, the Stuttgarter Philharmonie, the Mozarteum Orchester Salzburg, the Orchestre National du Capitole de Toulouse under Michel Plasson, and the Orquesta Filarmónica de Gran Canaria under Adrian Leaper. With the latter he made the world premiere recording of two guitar concertos dedicated to him by Leo Brouwer (Concierto de la Habana, 1998) and Carlos Fariñas (Concierto, 1996). Both composers were teachers of Joaquín Clerch and are regarded as two of the most significant composers in the history of Cuba. Joaquín Clerch is also in demand for performances of chamber music and regularly performs in a variety of different combinations. Other musicians he has appeared with include Ruggiero Ricci, Eliot Fisk, Anthony Spiri and Gunter Teuffel. Since 1999, Joaquín Clerch has held a professorship of guitar at the Robert Schumann University in Düsseldorf.
www.joaquinclerch.com