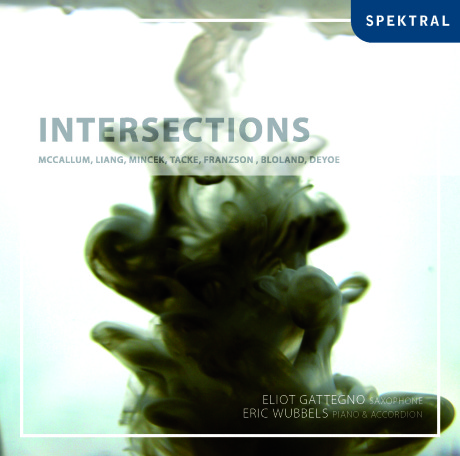 »Throughout the album he [Eliot Gattegno] demonstrates an undeniable command of his instrument and a keen imagination. But most importantly, he shows that he plays the music, not the saxophone.«
New Music Box of the American Music Center

Per Bloland (* 1969):
Quintet for Solo Saxophone and Electronics

Hailed by the Boston Globe as “having superior chops backed up by assured musicianship”, saxophonist Eliot Gattegno (b.1983) enjoys a multi-faceted international career as a soloist and chamber musician. He began studying music at the age of two and at seventeen made his debut in Boston’s Jordan Hall performing with Christopher O’Riley on the National Public Radio show “From the Top”. Since then musical activities have taken him throughout Africa, Asia, Europe, North and South America. Recent engagements include recitals at Carnegie Hall and Lincoln Center, concertos and recordings with the Boston Modern Orchestra Project, and festival appearances at Spoleto, Tanglewood, and Yellow Barn. In 2008 Eliot was the first saxophonist and one of the only Americans to ever win the “Kranichsteiner Musikpreis” of the Internationalen Ferienkursen für Neue Musik Darmstadt. He is a founder of various ensembles including “the kenners”, Second Instrumental Unit, Radnofsky Quartet, Grenzenlos, as well as being the Executive Director of World-Wide Concurrent Premieres and Commissioning Fund. A former Artist-in-Residence at Harvard University and faculty of the New England Conservatory Preparatory School Eliot has presented lectures at Columbia, Princeton, Stanford, and the University of California, Berkeley. Eliot is a graduate of the Interlochen Arts Academy where he received the Fine Arts Award and holds Bachelors and Masters degrees with academic honors and distinction in performance from the New England Conservatory where he received the Tourjee Alumni Award. Eliot can be heard on Albany, Cantaloupe, Innova, and Mode Records amongst others.
Further infos: www.eliotgattegno.com/

Eric Wubbels (b. 1980) is a New York-based composer and performer. He is Executive Director, pianist, and a composer member of the Wet Ink Ensemble, an ensemble devoted to experimental and contemporary music in New York. Wubbels‘s music has been presented at concerts and festivals in Europe, Asia and the U.S. He has received performances and commissions from the Left Coast Chamber Ensemble (San Francisco), Orkest de Ereprijs (Netherlands), Hochschule für Musik Hanns Eisler (Berlin), Second Instrumental Unit (Boston), Manabe/Moriyama Duo (Japan), and the Wet Ink Ensemble, among others, and grants from the Argosy Foundation Fund for Contemporary Music and Robert Wilson‘s Watermill Center. His music has been recorded on the Quiet Design (Austin) and carrier records (New York) labels. As a pianist and accordionist, Wubbels performs with the Wet Ink Ensemble and The Kenners. As a soloist, he recently gave the American premiere of Peter Ablinger‘s piano and electronics cycle “Voices and Piano,“ and has premiered works by both internationally renowned and emerging composers, including Michael Finnissy, Bernhard Lang, Davíd Brynjar Franzson, Alex Mincek, and Kate Soper, among many others, appearing at festivals in Brazil, Germany, Hungary, and Mexico.