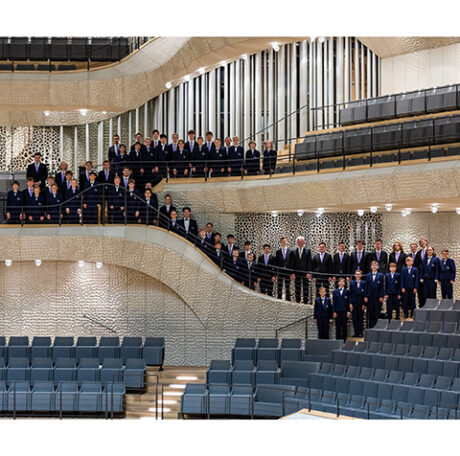 In the year 975, Bishop Wolfgang founded his own cathedral school in Regensburg. This, then, was when the Regensburger Domspatzen came into being. Today, more than one thousand years later, the boy’s choir ranks as one of the oldest and most famous in the world. Right from the beginning, the school boys were assigned the task of singing the liturgical music in the bishop’s church. Even today, this function remains the principle task of the Regensburger Domspatzen. They still provide the music for the worship services at the Regensburg Cathedral, and can be heard every Sunday during the school year as well as on the main feast days in the church calendar.
They are noted for their clear and warm choral tone, unmistakable features that have made them famous over the decades. Their choral sound is also notable for its versatility and dynamic range, and their singing is able to move the hearts of the listeners in a very special way. The clear sound of a boy’s choir is able to bring an extra degree of radiant power and impressive depth to a wide range of choral music. Along with the Domspatzen, there are also two other choirs that are under the charge of the music director.
The extraordinarily wide musical repertoire of the Regensburger Domspatzen ranges from the oldest church music, the Gregorian chants, through to the vocal polyphony of the sixteenth century with Palestrina, Lassus, and Hassler, and on to Baroque and Romantic music as well as folk songs and contemporary composers. The Domspatzen regularly take part in major oratorio productions with wellknown orchestras and soloists.
The Domspatzen are also part of a larger establishment in Regensburg which also in- cludes a regular school, a high school (gymnasium) with classes all day, and a boarding school. In 2022, for the first time in 1047 years, the Domspatzen in the gymnasium and boarding school has begun to also include girls. In the future, there will also be an in- dependent girl’s choir as well.