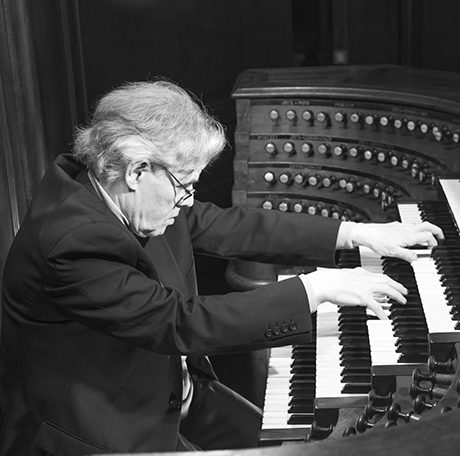 Daniel Roth received his first musical education at the conservatory in his home city of Mulhouse (Alsace) and succeeded in playing the organ at an early stage. In 1960 he entered the Conservatoire National Supérieur in Paris and also won numerous awards in international competitions here. At age 20 he made his debut at the Sacré-Coeur Basilica in Paris as assistant to his organ professor Rolande Falcinelli. After
1985 he took up the post as titular organist at the St.-Sulpice Church. From 1974 to 1976 he was a professor at the Catholic University in Washington D. C. He later taught at universities and conservatories in Marseille, Strasbourg and Saarbrücken, and from 1995 to 2007 he taught in Frankfurt/Main. Since that time he has carved out an international career as a concert organist, holds master classes and works as a
jury member at competitions. He has been honoured by the Académie des Beaux-Arts with the Florent-Schmitt Prize as composer of various works for organ, flute and organ, choir and organ as well as for orchestra.