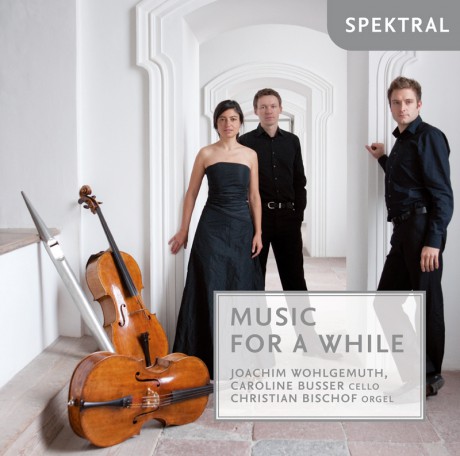 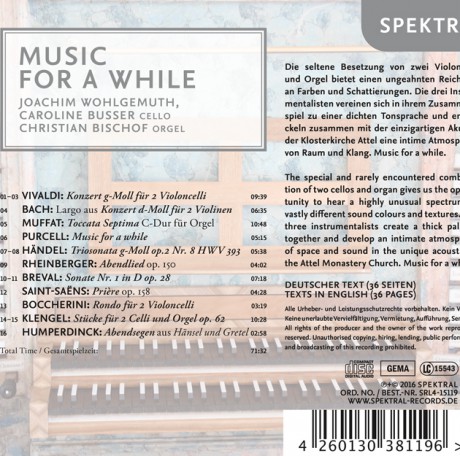 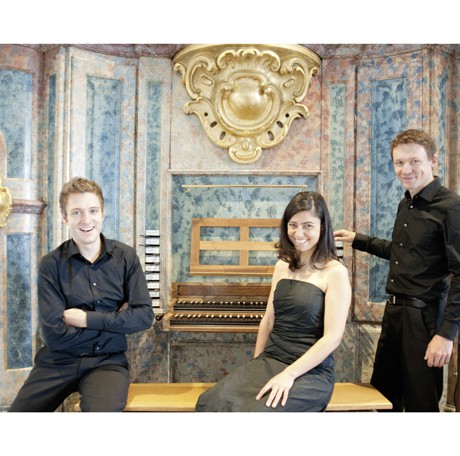 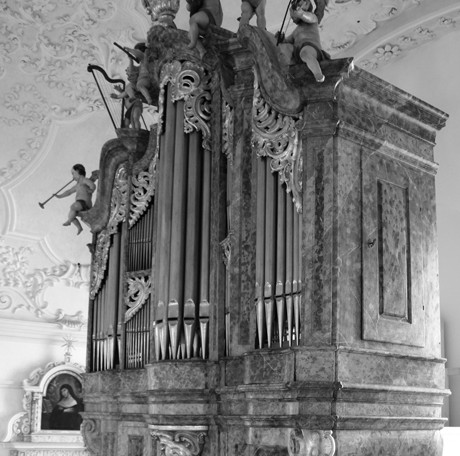 The special and rarely encountered combination of two cellos and organ gives us the opportunity to hear a highly unusual spectrum of vastly different sound colours and textures. The three instrumentalists create a thick pallette together and develop an intimate atmosphere of space and sound in the unique acoustic of the Attel Monastery Church. Music for a while.

Caroline Busser is a cellist of German/French origin. She was born in Munich and received her first cello lessons with professor Stephan Haack. Further studies took her to Strasbourg, Detmold, and the United States, where she worked with Bernard Greenhouse. Finally, she studied with Helmar Stiehler at the Munich University of Music where she completed the Meisterklassenabschluss degree. She has played in the National Youth Orchestra of Germany and the Junge Deutsche Philhamonie, and in 2010 she won a scholarship to play in the Orchestral Academy of the Munich Philharmonic, where she performed with conductors such as Maazel, Thielemann, and Mehta.
Caroline Busser has been the recipient of many prizes and awards such as the Jugend Musiziert State Prize, the Dieter-Ulrich Sponsorship Prize in Munich, and a one-year scholarship from the Rotary Club. She has also won the Albert Eckstein Foundation award, the Ernst von Siemens Kulturfond award, and has played in the Yehudi Menuhin Live Music Now series. She is an avid chamber musician and has performed with the Philharmonic Cello Quartet at the International Cello Congress in Japan as well as in a piano trio at the Samos Young Artists Festival. Since 2013, Caroline Busser has been principal cellist at the Pfalz Theatre in Kaiserslautern.

Cellist Joachim Wohlgemuth was born in Augsburg and was given his first cello lessons at the age of seven. At 14, he began studying at the Leopold Mozart Conservatory in Augsburg, where he joined Hartmut Tröndle’s class. Three years later Wohlgemuth continued his studies at the Munich University of Music and Theatre with Helmar Stiehler. Upon completing his secondary schooling he became a full-time student of Stiehler, with whom he finished his Diplom degree, thus earning entrance to the Meisterklasse. After achieving early success in string quartets and piano trios in the Jugend Musiziert State Competition, Joachim Wohlgemuth went on to win prizes as a solo cellist in the Salzmann Competition for young cellists, the Sponsorship Prize of the City of Augsburg, and the Lions Music Competition for Violoncello in Munich. Before completing his Diplom degree, Wohlgemuth had already won a scholarship to play in the Orchestral Academy of the Bavarian State Opera, where, until 2007, he performed in many operas and concerts and appeared multiple times as soloist in chamber and orchestral concerts. Chamber music courses with Franz Beyer, Thomas Brandis, Guido Schiefen and Marin Ostertag also contributed to his musical development. Since 2007, Joachim Wohlgemuth has been a member of the Munich Philharmonic.

Christian Bischof, born in 1982, grew up in Bamberg and received his initial musical training at the music school of the Regensburg Cathedral Choir. After finishing secondary school, he studied church music and organ at the Würzburg University of Music and the Music School in Piteå, Sweden. As a scholarship recipient of the Academic Endowment of the German Bishops’ Conference, he completed his studies in 2011 and and received the coveted Artist Diploma in Organ Performance (Meisterklassendiplom). His teachers included Christoph Bossert (organ), Hans-Ola Ericsson (organ), Zsolt Gárdonyi (organ and music theory), Jörg Straube (choral conducting), and Markus Bellheim (piano).
After several years of working as a church musician in Bamberg, Landshut, and at the Augustinian Church in Würzburg, Christian Bischof began serving at the Basilica of the Benedictine Abbey in Scheyern in 2012. He has been the organist and choir director of St. Margaret’s State Parish Church in Munich since 2013. As an artistic director, he has started several concert series’ and has played an important role in transforming and redesigning the sound of the symphonic organ in Würzburg’s Augustinian Church.
He has taught at the church music department of the Würzburg Diocese and has also lectured at the Würzburg University of Music. In his busy concert career, Christian Bischof performs organ music from the Middle Ages and the Renaissance while also focusing heavily on the German Romantic repertoire (above all Max Reger) and the works of Olivier Messiaen. As soloist and in collaboration with well-known instrumentalists, ensembles, and choirs, Bischof has given many concerts on important organs in Germany and abroad. In 2013, Bischof made his American debut at the regional convention of the American Guild of Organists in Kalamazoo, Michigan and was Artist in Residence at Western Michigan University. Bischof is also active as a certified organ consultant. 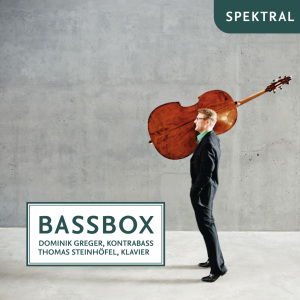